When the neurosurgeon who performed Meg’s left temporal lobectomy was asked to describe what he saw at the start of her epilepsy surgery, he paused and explained through a undulating blue mask, “I’m looking at a bunch of yellow, contused brain slapped up against the skull that is a remnant from Meg’s previous injury.”

The surgeon’s exact description of Meg’s brain is easy to remember because portions of her surgery are available on tape and were visible for all of the Omaha metropolitan area to see.  Over the whir of a bone cutter and the staccato beep of a heart rate monitor, you can also hear the hushed buzz of the operating room staff working as the neurosurgeon comments on the findings in Meg’s injured brain.  Prior to surgery, Meg made the courageous decision to allow a local television station in Omaha, Nebraska tape portions of her pre-surgical evaluation and then parts of her epilepsy surgery to help raise awareness and inform others about epilepsy.  Even though she’s not awake, if you look closely during the video of the surgery, you can see a wisp of Meg’s dark brown hair peeking out bravely at the nape of her neck, as if her ebullient and bright personality could not be sequestered even in the confines of the most sterile and grave settings.

Meg’s story began in the spring of her freshman year of high school, when she felt like she hadn’t a care in the world.  She was playing on the high school basketball team, had a great group of girlfriends, and had everything she hoped for.  Then one March afternoon, everything changed.  When an older girlfriend drove Meg and a group of friends home from school, the car collided with a tree on Meg’s side of the vehicle.  When Meg was being evaluated in the Emergency Room immediately after the car accident, she suffered a generalized tonic clonic seizure — the first of many to come.

Meg remained in a coma and on life-support for a week following her car accident.  When she finally awoke and studied her face in the mirror, all she noticed that was drastically different was big brown pieces of hair standing up at an odd angle on the left side of her head.  Meg’s mother gently explained that the physicians that treated her in the emergency department had to shave the left side of her head to monitor her intracranial pressure.  Meg was relieved that after a serious accident, all that had changed was her hair.  She didn’t know what was brewing inside.

Meg’s hospitalization after the car accident and traumatic brain injury was followed by a longer stay at a local rehabilitation center where she concentrated on physical therapy, occupational therapy, and speech therapy.  Because Meg’s brain injury was in her left temporal lobe, she had particular difficulty with short term memory and speech.  Meg states that ever since her accident, she’s had difficulty finding the right words during conversations and naming objects that used to seem commonplace.

Despite her major accident and injury, Meg returned to high school with her class in the fall of her sophomore year after a period of rehabilitation with determination and confidence.  Meg wasn’t able to participate in her beloved basketball any more — the risk of further concussions or closed head injuries was too great — but she was pleased to be back amongst her peers.  As a result of her injury, Meg required extra time on her tests at school and some extra accommodations for learning, but she did well in her courses and achieved her dream of acceptance into a nursing school when she graduated from high school.

And because epilepsy is never predictable and tends to strike at the most inopportune times, Meg had her first complex partial seizure when she was standing in front of a class of nursing students giving a presentation about a pediatric nursing topic.

Meg wrote about her first complex partial seizure on the website http://www.myepilepsystory.org:  “. . .all of a sudden, out of nowhere, my heart began to race—not out of nervousness, but more like I was running from a train and couldn’t get away. I kept trying to swallow, but my mouth was too dry. I had prepared for this presentation, but the words I was planning to use just weren’t coming out.

“I tried to take some deep breaths to relieve what I thought was nerves, but I couldn’t even gather the breaths. The scariest part was knowing how important it was to make eye contact with the entire audience during a presentation, but for 15 seconds I felt paralyzed and blankly stared, unable to look away from one side of the room. After what seemed like forever, I regained my composure and was able to finish the last minute or so of my presentation”

When the event was over, Meg was able to complete her presentation.  A nursing instructor who saw the event, however, approached Meg later and suggested that she see a neurologist.  Soon Meg was started on her first antiepileptic drug which eventually led to another, and another, and then a different one.  Meg tried a total of four anti epileptic drugs at their maximum doses prior to her decision to have surgery.  As her stress at school increased, her seizure frequency increased as well.  Though Meg was passionate about becoming an RN, she had to slow down in the pace of her studies because the medications to treat her seizures were affecting her memory and concentration.  With hard work, true grit, and true devotion to her chosen profession, Meg graduated as an RN one year behind the class that she started with, yet lightyears ahead of the grips of epilepsy.

After graduating from nursing school, Meg worked as a pediatric nurse in an outpatient clinic and then as a school nurse in an elementary school.  Though she loved interacting with children, Meg eventually moved from areas of direct patient care to phone triage because of her worsening breakthrough seizures.

Several years after graduating from nursing school, Meg became pregnant.  Despite taking escalating doses of antiepileptic drugs during her pregnancy, she delivered a perfect baby boy, who is now three years old.   The significant hormonal changes that characterized the period after Meg’s pregnancy caused Meg’s epilepsy to spin out of control.  Her seizure frequency increased, several more medications were unsuccessful and she was determined to be a candidate for a left temporal lobectomy.  When the local news approached Meg and asked if she would be willing to participate in a series of feature news stories following her through the surgical experience, she agreed.  Although she was nervous to allow cameras and the public to view her at her most vulnerable, she thought it was an important way to tell part of the real story of epilepsy to the general public.

Meg in the hospital prior to her epilepsy surgery

Meg’s surgery has proven successful.  She will celebrate the two year anniversary of freedom from seizures this April.  Meg still takes high doses of three antiepileptic medications but the constant dizziness that she assumed was a medication side-effect prior to surgery is gone.  Meg is now also working as a nurse case manager for at-risk mothers in the Omaha area to teach infant care and help with the newborn transition.

In addition to doing her part to raise awareness about epilepsy, Meg hopes to help others that are experiencing seizures cope with their illness.  To do this, she started Camp YouCan, a summer camp for children with epilepsy in Nebraska.  Camp YouCan is a day camp where kids with epilepsy can come together to play and learn about how to cope with their illness.  Meg was able to coordinate donations from local organizations and businesses so that 24 children could attend last year and she is planning for a bigger camp with an overnight event this summer.

From a fateful afternoon car ride to a news story that touches thousands and a camp that can impact a child’s life forever, Meg has turned her tragedy into a multitude of triumphs.  The links to videos of Meg’s epilepsy surgery are attached below  — you may want to grab a kleenex.

Please pass it on. 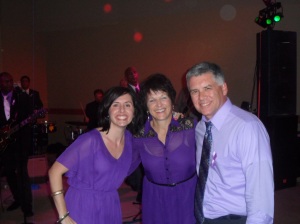 Meg with her parents

Meg and her husband

Meg gives a “thumbs up” while wired for an EEG

Meg at Camp YouCan, a camp she founded to help children with epilepsy 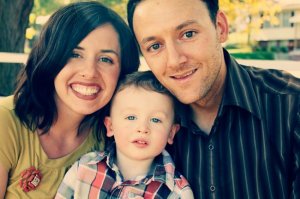 9 comments on “Meg: An RN with Epilepsy”